It Went BETTER Than He Could Have Imagined

A client I worked with shared the good news about his success speaking at a conference (pre-pandemic).

If you have struggled with speaking anxiety, read my client’s story below to see what is possible when it comes to dealing with extreme anxiety.

I bet you will find parts of his story that you can relate to. He talks about being tied in knots, lip quivering, and feeling nauseated. Does that sound familiar?

You might wonder how he ever made it through speaking at a conference.

Well, he did make it through and said to me, “It was better than I could have imagined, actually.”

Read his story below… and if you’re interested in creating the same results for yourself, I share how you can do that after his story.

“I was invited to participate in a day-long series of panels for a local tech company to tell the story of my non-profit organization.

“Two of those panels included speaking roles in front of 250, and then later 400+ people. In addition to that, there were video recordings, live broadcasts, etc. throughout the day.

“I started the day feeling a bit nauseated, tied in knots, and wondering if/suspecting that I had not prepared enough, not practiced enough.

The Moment of Truth

“And then – the actual speaking engagements happened – I felt my lip quivering a bit at moments – but I was grounded and I wasn’t lost in my head.

“I had no script, no canned responses – and I just spoke. I shared stories and I saw members of the audience nodding with acknowledgment, at times I heard the audience burst into laughter.

At the end of the day, I had people come up to shake my hand and tell me how moved they were by some of the stories I shared.

“There was a moment when I became incredibly vulnerable – got a bit teary-eyed retelling one of the stores of my organization’s work/impact in the world – and I was able to speak through that.

I believe it’s possible for you, like my client, to have a breakthrough as well.

But you have to do the work to have a breakthrough.

When I received this note, I felt so proud of him. I felt his courage and strength to face and tolerate his fear. He didn’t pull back from his fear but instead pushed forward through it.

He took himself all the way to the edge of his comfort zone and found he was brilliant.

Remember that he said, “…at the end of the day, I had people come up to shake my hand and tell me how moved they were by some of the stories I shared.”

He made an impact in people’s lives.

And now he has a whole new world of possibilities open for him… because he can trust himself to speak… and knows the impact he makes in people’s lives.

It’s possible for you to have the same outcome as my client.

The easiest way to get started is to let someone guide you. Which is why I’m here.

I can’t think of a better use of your time and money than taking a step toward finding your true voice— being the real you–to your audience and to the world.

Click here to get started. You won’t regret it! 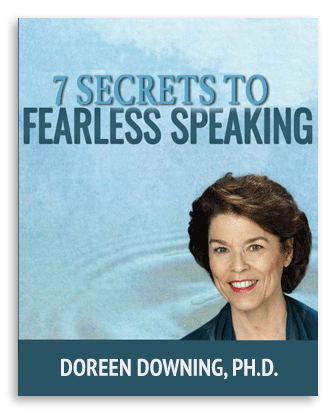 You have signed up for the interview.